The child pornography lawyers at the Law Offices Of Beles & Beles have been aggressively defending clients throughout the Oakland-San Francisco Bay Area for over 50 years. If you are facing allegations of any type of sexual misconduct in Oakland, Hayward, Fremont, Pleasanton or Concord, our defense attorneys will defend your freedom. We are the sex crimes defense specialists.

Prosecutors in Oakland and throughout the Bay Area treat people accused of viewing illegal images on their computer as if they have committed a very serious sex offense. Yet, many of our clients didn’t even knowingly commit a crime and have no criminal record.

Sometimes our clients have simply made a mistake and thought that they were viewing legal adult images. Other times, our clients may share a computer with a housemate or family member who has used the computer without their knowledge. There are also situation where people have an addiction that they can’t control, but are otherwise law abiding. No matter what your situation is, we never judge and we fight to protect your rights and keep you out of jail. Our goal in these situations is to discreetly defend you, protect your reputation and work to get the charges dropped.

Let a criminal law specialist and our team of experienced investigators and experts help you. To schedule a confidential consultation with one of our sex crime attorneys, contact the Law Offices of Beles & Beles today.

What is Child Pornography?

One minute you can be surfing the net and the next you can be allegedly committing a crime in the privacy of your own home. Visit the wrong site and the police will be breaking down your door, seizing your computer, and searching the hard drive for all of the sites you have ever visited, looking for suspected “child pornography”.

Simple downloading of images can bring a mandatory 5 years in the federal penitentiary. Call us to prevent this disaster. We are frequently able to prevent prosecution altogether when clients bring investigations to our attention in time. If necessary, we hire computer experts to analyze the strength of a case and plan effective defense strategies accordingly.

Most child pornography defendants are good people with a bad habit. They don’t belong in jail.

Illegal Search and Seizure: We Suppress the Evidence 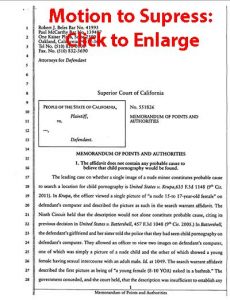 We Employ the Best Experts

If after careful legal analysis it’s impossible to suppress the evidence we employ an expert psychologist and lie detector professional to prove that you are not a child molester. This may sound bizarre but it is important because many district attorneys and judges treat child pornography defendants like child molesters. This is absolutely a false assumption.

We also employ the best experts to examine the seized material. Recently our forensic computer expert was successful in showing the District Attorney that our client had accidentally downloaded child pornography (sexual graphic images of children under the age of 18) in his search for legal constitutionally protected adult pornography.

Child pornography defendants are typically not criminally oriented at all. Usually, they are very law abiding, often highly educated, frequently professionals – but, with a very illegal habit. It is being treated by the U.S. government and local law enforcement as the crime of the century. Every year, the federal government makes the sentences longer.
(Change in Child Pornography Guidelines)

People that commit homicide go to jail, get released, get off parole. But, download some child pornography and the state wants to treat you like a serious child molester for the rest of your life. Our office is dedicated to fighting this unfair law. Help is as near as your phone.

Beles & Beles is proud of results we’ve achieved for our clients facing child pornography charges. In a recent case our client received straight probation, no jail, and no sex registration.
Our office is dedicated to fighting this unfair law. Help is as near as your phone.

Historically, guideline sentences for possession of child pornography were a fraction of what they are today. When the U.S. Sentencing Commission first enacted a guideline for possession of child pornography in 1990, the base offense level was 10. The guideline had available one upward adjustment: two levels for images of minors under age 12, resulting in a total exposure based on an offense level of 12, which computes to 10 to 16 months in jail with a possibility of straight probation for first offenders.

Over the last 10 to 15 years, the sentencing Guidelines have undergone 11 amendments that have massively increased the applicable sentence for possession of child pornography. From 2002 to 2007, the average imposed sentence on an offender convicted of a child pornography-related offense increased by 11.9 months. By 2007, the mean sentence for a child pornography offender had grown to 109.6 months (over 9 years). This represents more than a 300 percent increase in the typical imposed sentence since 2002. Troy Stabenow, Deconstructing the Myth of Careful Study: A Primer on the Flawed Progression of the Child Pornography Guidelines.

“[T]hese changes [were] largely the consequence of numerous morality earmarks, slipped into larger bills over the last fifteen years, often without notice, debate, or study of any kind. Congressionally mandated changes were even enacted to prevent the Commission from implementing carefully considered modifications which would have lowered applicable offense levels.”

In the United States v. Hanson, 561 F.Supp.2d 1004, 1009 (E.D. WI 2008), the Hanson court also noting that the amendments “destroyed some of the careful distinctions the Commission had drawn between true peddlers of child pornography and more simple possessors or transporters.” Indeed, in various instances, the congressional directives were enacted over the objections of the Sentencing Commission it was noted that the five level adjustment for number of images was passed over Sentencing Commission objections, as well as the objections of Chairman of the House Committee on the Judiciary, the Judicial Conference of the United States, and the American Bar Association.

This history is similar to the widely criticized crack cocaine guidelines, which were also the result of congressional directives.

“Much like the crack guideline criticized by the Supreme Court in Kimbrough [v. United States, 128 S. Ct. 558, 570 (2007)], [the] guideline… is not representative of the Commission’s typical role or of empirical study. The guideline has been steadily increased despite evidence and recommendations by the Commission to the contrary. Congress has repeatedly amended it directly, ostensibly to target mass producers of child pornography and/or repeat abusers of children, a class of offenders that make up less than 5% of those affected by the changes.”

In the meantime, since the promulgation of these extremely excessive guidelines, the United States Supreme Court decided United States v. Booker, 125 S.Ct. 738 (2005) in which the Court ruled that the guidelines were discretionary rather than mandatory and that the sentencing factors. In Nelson v. United States, 129 S. Ct. 890 (2009), the Supreme Court recently held that it is error for a district court to even presume that a sentence within the range recommended by the Sentencing Guidelines was reasonable, stating that it was inadequate for a district court to simply refrain from treating the Sentencing Guidelines as mandatory.

In the wake of these Supreme Court decisions, and relying on the fact that these child pornography guidelines being increased were not the result of the Sentencing Commission’s ongoing work, but forced upon the Commission by Congressional “morality earmarks” a growing number of federal courts have ruled that these guidelines are either entitled to less consideration than Commission-generated guidelines, or should not be given any weight at all. United States v. Shipley, 560 F. Supp. 2d 739, 744 (S.D. IA 2008) (“These modifications do not appear to be based on any sort of empirical data, and the Court has been unable to locate any particular rationale for them beyond the general revulsion that is associated with child exploitation-related offenses.

It should be argued that the original guideline level which equals 10 to 16 months for simple possession is closer to what a sentence should be rather than the harsh, totally unreasonable 8 to 9 years that recently has been the norm for so many defendants for simple, non-commercial, private possession of child pornography.

Frequently, first offenders with no criminal record, when confronted with such shocking high sentences are at grave risk for suicide, see The Recorder.

These tragic results would be avoided with a return to more logical and humane sentences.